Despite the documents he had signed, Snepp went to the publishing company Random House with his manuscript for a book titled Decent Interval. The book described the American withdrawal from Vietnam and Saigon and gave unflattering details about the CIA’s involvement. Snepp received a $60,000 advance from Random House, and his contract called for potentially lucrative royalties. The book was based on Snepp’s experience in the CIA, and he never submitted it to the agency for approval. 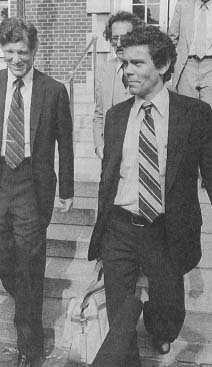 Random House published the book in November 1977. On February 15, 1978, the government sued Snepp in the U.S. District Court for the Eastern District of Virginia, which covered Snepp’s suburban Washington, D.C., residence. Because the book didn’t contain any information that was officially designated as classified, secret or top secret, the government took a conservative approach. Instead of criminal prosecution or seeking an injunction against publication of the book, the government asked the court for all of Snepp’s profits as compensation for breach of contract. Snepp stood to lose everything under his contract with Random House.

The District Court ruled in the government’s favor on July 7, 1978, and the U.S. Court of Appeals for the Fourth Circuit largely affirmed the District Court’s actions on March 20, 1979. Snepp appealed to the Supreme Court. Both sides had extensive legal teams, because the American Civil Liberties Union and the Authors League of America came to Snepp’s assistance.

In an extremely rare procedure, the Supreme Court decided to consider the case, but the Court made its decision solely on the basis of the papers filed by both sides. There was no hearing. In upholding the district court’s decision to make Snepp turn over all his proceeds from book sales to the government, the court relied heavily on the testimony of CIA Director Admiral Stansfield Turner before the district court that Snepp’s book had hurt CIA operations:

Over the last six to nine months, we have had a number of sources discontinue work with us. We have had more sources tell us that they are very nervous about continuing work with us. We have had very strong complaints from a number of foreign intelligence services with whom we conduct liaison, who have questioned whether they should continue exchanging information with us, for fear it will not remain secret. I cannot estimate to you how many potential sources or liaison arrangements have never germinated because people were unwilling to enter into business with us.

Snepp’s defense was based on the argument that the secrecy agreements violated his right under the Constitution’s First Amendment to express himself, a right which cannot be contracted away. In rejecting Snepp’s argument, the court held on February 19, 1980, that the government could use employment agreements to bind its employees to vows of secrecy:

The Government has a compelling interest in protecting both the secrecy of information important to our national security and the appearance of confidentiality so essential to the effective operation of our foreign intelligence service. The agreement that Snepp signed is a reasonable means for protecting this vital interest.

Therefore, despite the court’s historic concern for First Amendment rights, it held in a 6-3 decision that the government is entitled to enforce contracts with its employees that prohibit publishing sensitive material without prior consent.