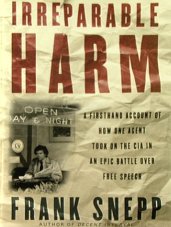 “ CIA v Snepp was a constitutional train wreck—and you can’t avert your eyes from Irreparable Harm, Frank Snepp’s hypnotizing and heartbreaking account of his case.”—Jeffrey Toobin

“ …excruciating honesty…must reading for every law student in America, and for every burgeoning nihilist…He took a courageous stand and paid for it. Snepp, and the Constitution, deserved better. ”—The Los Angeles Times

“ Readers who have been ground slowly and exceeding small by the justice system will love it … Relishers of unspeakably painful government ironies will go for it … First Amendment enthusiasts will applaud it … At its best, this chronicle of a whistleblower whistled down by a most suspect policeman is a reminder that cannot be repeated often enough of how government agencies hide their occasional malevolence and frequent Keystone Kop stupidities behind the tattered curtain of need-for-secrecy. ”—The Washington Post

“…a compelling case study…at once a moving personal narrative and a disturbing examination of how claims of national security can have a sledgehammer effect on arguments about free speech, overwhelming all competing claims.”—Publishers Weekly

It will haunt him for the rest of his life. It would galvanize him for a battle that would nearly crush his spirit.

The Vietnamese woman who killed herself and their son because he failed to rescue them. The thousands of Vietnamese who were left to torture and murder at the hands of a hostile occupier. Guilt and sorrow would grip him, never to relent, propelling him into a confrontation with the CIA that would cost him everything, even his own father.

Frank Snepp’s moral odyssey began with the fall of Vietnam, and would not end until the United States Supreme Court made him a scapegoat for a generation of protest—the first American ever to be gagged for life simply for taking on the CIA on a matter of principle.

But Snepp’s experiences didn’t touch only him and those closest to him. The fallout has affected the way countless other First Amendment cases are decided in court and has strengthened the power of the White House and even private industry to silence critics.

A searingly candid account of Snepp’s passage from lockstep CIA agent to improbable battler for free speech, “Irreparable Harm” tells of terror and sacrifice, and of the obsessive determination of CIA officials to destroy a man who dared call them on their mistakes.

Among the last CIA agents to be airlifted from Saigon during the closing moments of the war, Frank Snepp returned to CIA headquarters in the summer of 1975 haunted by the loss of his Vietnamese son and lover—and determined to force his colleagues to assist other Vietnamese left behind. But this was the Season of the Reckoning with the CIA under investigation by Congress and unwilling to admit any more transgressions, least of all its final ones in Vietnam. So when Snepp attempted to prompt an internal after-action report to generate support for the abandoned, his colleagues resisted and reviled him, and finally hounded him out of the Agency in an effort to keep a lid on the truth. But Snepp would not be cowed, and for the next eighteen months, with the help of brave friends who risked both career and welfare for him, he carefully and discreetly assembled the report the CIA didn’t want, even as former fellow agents pursued him like a fugitive on the run, attempting to intimidate him into silence.

His expose, “Decent Interval”, was published by Random House in total secrecy—the first American book to be brought out this way. But the firestorm of publicity it ignited, including a 60 Minutes exclusive and front-page coverage in The New York Times, drove the CIA and the White House to launch a campaign of retaliation unparalleled in the annals of American law.

While acknowledging that Snepp’s book had had compromised no secrets, the government’s lawyers insisted that its unauthorized publication alone had “irreparably harmed” the nation’s security by creating an impression of a breakdown in CIA internal discipline that could frighten off intelligence sources abroad. They also claimed that it violated an invisible trust and a secrecy agreement Snepp had signed with the Agency, and demanded, as penalty, that he be gagged for life and deprived of all his “ill-gotten gains,” every cent he had earned from his act of “faithlessness.”

They offered no proof to support their allegations of harm, ignored inconsistencies in the six secrecy agreements Snepp had signed, and glossed over the fact that other ex-agents, friendlier to the CIA, had routinely been allowed to publish unapproved books and articles without protest or censure. Even so, a scandalously prejudiced Federal judge succumbed to the CIA’s extravagant national security claims and ruled against Snepp at every turn, reducing him to an American version of Colonel Alfred Dreyfus, the Frenchman ruthlessly martyred for his beliefs.

Along the way an outraged U.S. Senator took further vengeance on the ex-agent-turned-author by blocking his father’s appointment to the federal bench, thus effectively stalling his judicial career and forever souring his relations with his son.

But young Snepp’s ordeal wasn’t over. Months later, in late February 1980, the U.S. Supreme Court took up his case on appeal—and used it to savage both the defendant and the First Amendment.

While upholding the most draconian of the earlier rulings against Snepp—a lifetime gag and confiscation of every penny he’d made from “Decent Interval”—the Court lowered the standard by which the government can gag you or any other American in the name of national security. With its landmark ruling in The United States v. Snepp, the nation’s highest tribunal made it possible for the CIA or any other government agency to silence critics simply by convincing a court that they’re imperiling the “appearance” of airtight official secrecy, whatever that means.

And don’t suppose that genuine national security interests need be at stake. Remember: Frank Snepp was persecuted, prosecuted, gagged and wrecked financially even though the CIA conceded in court that nothing he had made public exposed any official secrets.

Reverberations from the ruling quickly spread through the government and private industry and continue down to the present. Successive presidents from Ronald Reagan to Bill Clinton have used it to justify placing millions of government workers, from FBI agents to park rangers, under censorship rules that prevent them from writing even novels without official approval. The Reagan administration invoked it to limit the reach of the Freedom of Information Act. The Bush administration used it to discourage government workers from blowing the whistle on bureaucratic waste and abuse, claiming that any such disclosure violates an implicit obligation of trust. The Clinton White House relied on the Snepp to try to squelch an early expose of the president’s romantic peccadilloes and to keep criticism of its mid-east policies out of print. The cigarette maker, Brown & Williamson, turned Snepp against whistleblower Jeffrey Wigand and CBS’ 60 Minutes to discourage them from airing the firm’s dirty secrets.

“An unprecedented vote for censorship” is how The Los Angeles Times described the ruling against Snepp. “No court decision in our history,” observed columnist Nat Hentoff, “has so imperiled whistleblowers and thereby the ability of all citizens to find out about rampant ineptitude.”

Till now only Constitutional scholars and victims of the resulting censorship have appreciated what the Supreme Court did on February 19, 1980.

And no one has ever told the story of how the CIA and opportunistic government prosecutors manipulated the courts — even the Supreme Court itself — by withholding evidence and concealing truly dangerous security breaches to score this direct hit on the First Amendment.

But now from the bulls-eye comes a riveting firsthand account of what it’s like to go up against the government’s Goliath and lose — not just free speech rights, but family, friends, reputation, even the very ability to survive.

Snepp’s harrowing memoir of his ordeals, from his shadowy trench battles to the Agency and the treachery of false sympathizers, to the destruction of friends and family and his historic showdown with the CIA in the courts, will leave the reader wondering how any of this could have happened in America.

Among “Irreparable Harm’s” most disturbing revelations is what it tells us about the biases of those who are supposed to be the unbiased arbiters of our most sacred freedoms — the judges and the courts.

In a narrative worthy of the most outrageous John Grisham thriller, Snepp recounts how the original Federal judge in his case, Roarin’ Oren Lewis, prejudiced the defendant’s chances by denying his plea for a jury trial, by refusing to let anyone but the CIA’s own witnesses expound on the “facts,” and by barring any mention of Vietnam in the courtroom, even though the entire case was about the book Snepp had written, “Decent Interval”, that exposed CIA failures in Vietnam.

You will also learn how the Supreme Court itself became a party to this travesty of justice. For in the tradition of Bob Woodward and Scott Armstrong’s The Brethren, Snepp taps into the Supreme Court’s innermost secrets to reveal its innermost workings. Drawing on never-before-publicized confidential files of two justices who felt his rights had been trampled — William Brennan and Thurgood Marshall—Snepp tells how a less friendly justice, Lewis Powell, railroaded him. The documents, provided to Snepp exclusively by the Brennan and Marshall estates, take you inside the Court’s deliberations as Powell, a former intelligence officer himself, shortchanges evidence and twists the facts to assure that the CIA will have its way with the naysayer.

So effective was Powell’s heavy hand that the Court disposed of Snepp without allowing his lawyers to file written or oral briefs, a procedure almost unheard of in Supreme Court history.

Alan Dershowitz and the unlikely defense…

And who were the frustrated advocates for the defense? Among them:

A young Alan Dershowitz, the Harvard-based Constitutional expert who would go on to represent (more successfully) Claus Von Bulow and O.J. Simpson.

ACLU lawyer and former anti-war activist Mark Lynch who helped blunt the government’s assault on free speech in the non-nuclear-secrets Progressive case, and who originally viewed Snepp as an enemy to the very beliefs that would cause him to forge an uneasy alliance with the ex-CIA agent.

If opposites attract, “Irreparable Harm” proves that opposites can overcome their ideological animosities to make common cause for worthy purpose, even if the ultimate outcome is disaster.