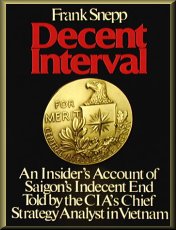 An Insider’s Account of Saigon’s Indecent End.
Told by the CIA’s Chief Strategy Analyst in Vietnam by Frank Snepp

Published by Random House in 1977
The following narrative, highlighting the events examined in Decent Interval, is adapted from a television documentary featuring Frank Snepp:

April 29, 1975: the evacuation of Saigon. It’s every man for himself; thousands of panic-stricken Vietnamese clawing at the Embassy gates, begging not to be left behind as the last of the Americans save themselves

If you were there that last day it was like being at a funeral where all the mourners are battling each other to avoid being abandoned at graveside.

I was one of those mourners: an operative for the Central Intelligence Agency and the CIA’s chief strategy analyst on the scene. I’d been in Vietnam five and half years when the end came. It was one of the most shameful moments I’ve ever lived through.

The reason it ended that way was wishful thinking on the part of a lot of American officials. Few wanted to admit the war was lost. So we waited too long to plan for the exit.

The final unraveling began two years before with the ceasefire negotiated by White House National Security Adviser Henry Kissinger. It got the last of the American troops out of South Vietnam, but left 140,000 North Vietnamese forces in the south. They wouldn’t get out because we hadn’t beaten them. And now they turned on the Saigon government itself…a government corrupt, inefficient, riddled with Communist spies, possibly as many as fourteen thousand of them according to intelligence estimates. A government about as solid and durable as Swiss cheese.

The first year of the so-called “cease-fire war” Congress tipped the odds hard against our allies by halting all U.S. bombing in Indochina, and a year later President Nixon resigned because of Watergate. The Communists were particularly encouraged by that event. They’d always seen Nixon as a madman whose unpredictability terrified them. With his departure they decided the road to Saigon was open.

In early 1975 they began chipping away at real estate close to the capital to test U.S. resolve and Saigon’s resiliency. The president of South Vietnam, Nguyen Van Thieu panicked, and in mid-March without telling any of us in the Embassy he ordered his forces to pull back in two crucial areas, the northernmost provinces of the country and the western highlands. The withdrawal — meant to preserve his best forces and strengthen his hand against potential coup-makers — quickly turned into a rout as terrified civilians became entangled in the retreating units. Over the next two weeks their Communist pursuers sliced the country in two and obliterated half of Saigon’s army.

It was too much for some Embassy officials to believe, including Ambassador Graham Martin. He was a Cold Warrior of the old stripe. He’d lost a son in Vietnam and he wasn’t going to lose Saigon to the Communists.

In early April, a month before the collapse, I briefed Martin, who had long considered me a trusted protege, on the destruction of government forces. He wouldn’t believe me. He insisted Saigon still had a chance.

In the next four weeks, he convinced himself and many in Washington that the Communists could be lured into another cease-fire and a new negotiated settlement that would leave South Vietnam intact though shorn of less “productive” territory. He refused to plan in earnest for an accelerated evacuation and many of us in the Embassy were forced to begin sneaking Vietnamese friends out of the country on cargo aircraft.

Four days before the end, in an effort to appease the Communists and sweeten the prospects for a last-minute political deal, the Ambassador persuaded President Thieu himself to step down and get out of Vietnam.

That night I drove Thieu to a secret airbase outside Saigon to catch his “black” flight out. Tracers lit the night sky, small arms fire crackled along the perimeters, and rumors of a murderous coup, like the one that had toppled and killed President Diem in 1963, were rampant. When Thieu showed up at the pick-up point, he was wearing a gray sharkskin suit, his hair slicked back and he looked like a model for an Asian edition of Gentleman’s Quarterly. He’d been weeping and drinking, but he had one consolation: he’d just slipped most of his gold out of the country.

As it turned out, Thieu made his escape safely. But it didn’t give the Communists a moment’s pause, any more than I’d expected it to. Indeed for weeks our intelligence had indicated they would stop for nothing, though the Ambassador wouldn’t believe it.

The latest and most definitive report had come two weeks before from a Vietnamese agent who’d never been wrong. This time he’d met with me at a safehouse near the capital and after chugging a beer – he loved Budweiser – had given me the bad news straight up: the Communists were going to overrun Saigon by the end of April, bringing in airstrikes and artillery, without any pause for a political fix.

On April 28 Communist aircraft bombed the Saigon airbase, and that night their artillery began pounding the edges of the city, the concussion hurling many of us out of bed.

But still Ambassador Martin was hopeful. He thought we could evacuate by fixed-wing aircraft at a leisurely pace. He wouldn’t even chop down a large Tamarind tree in the embassy courtyard to make way for helicopters. That was a mistake. The landing strips were soon blown apart, and with one hundred forty thousand Communist troops now within an hour’s drive of downtown Saigon, we clearly had not a moment to waste.

Mid-morning of the 29th, the White House finally overrode Martin and decided to send in helicopters from the evacuation fleet offshore. The signal to evacuate: a Saigon radio broadcast of Bing Crosby’s “I’m Dreaming of a White Christmas.”

For all of the advance warning the evacuation order caught the Embassy staff off guard – so much so we didn’t even have a master list of the Vietnamese employees, agents and collaborators who desperately needed to be rescued. So we spent the day rescuing ourselves and whatever lucky Vietnamese could sneak, beat or cajole their way onto a U.S. helicopter or sailing vessel.

At the Embassy walls Marine guards played God, picking those who would be saved, kicking back those who wouldn’t. Mothers were separated from children, some were trampled, others abandoned just outside the gates

Meanwhile remnants of the South Vietnamese army and air force fled into our arms, abandoning boats and aircraft at sea as they struggled to reach the evacuation fleet.

By mid-afternoon the Embassy compound itself was jammed with desperate Vietnamese waiting to be choppered off the roof or from the courtyard which had now been cleared of Martin’s Tamarind. I walked among them, handing out water and often- vain encouragement. At one point, the downdraft from an overladen chopper tore open bags of secret documents discarded in the courtyard and flung them into nearby treetops. The North Vietnamese would later use these and other abandoned files to identify agents and collaborators we’d left behind.

As the pace of the airlift accelerated, more and more Vietnamese were crammed inside the Embassy to hasten departures from the roof. Some were cradling animals, others clutched wailing children and as the air conditioning system broke down the heat and stench became unspeakable. Explosions rocked the building periodically as thermite grenades were used to destroy sensitive equipment, and through much of the day the walls shook as from a creeping case of nerves as rooftop incinerators gobbled up tons of classified files that had been left till the last moment to be destroyed.

From time to time I stopped by the CIA operations room to listen in horror at the radios as stranded Vietnamese agents pleaded over the circuits for help, begging not to be forgotten. Some would be picked up by Air America helicopters that CIA colleagues and I sent shuttling around the city. Most would be forgotten.

At one point a Vietnamese woman who had borne a child she said was my own called to say she would kill herself and the boy if I couldn’t rescue them. I told her to call back in an hour — I’d help her then. But when she called back I was downstairs briefing the Ambassador on another useless piece of intelligence, and she made good on her promise, adding two more deaths to those already weighing on my conscience.

When my time came to leave that night, with the last CIA contingent in the Embassy, we had to push Vietnamese out of the way in the halls to get to the chopper on the roof. I couldn’t look into their eyes.

Retreat is the most difficult of all military operations. But as a matter of honor you do not leave friends on the battlefield. In the evacuation of Saigon over half of the Vietnamese who finally got out escaped on their own with no help from us until they were far at sea.

The last CIA message from the Embassy declared: Let’s hope we do not repeat history. This is Saigon station signing off.

One thought on “Decent Interval”